Subsidies are paid out as set out in §59 of the Electricity Market Act in order to promote the use of renewable energy sources, make the energy sector more efficient, and ensure the security of domestic supply and capacity.

According to the Electricity Market Act, it is the TSO, i.e. Elering, which pays out the subsidies. The cost of financing the subsidy is passed on to consumers in proportion to their consumption of network services and the amount of electricity consumed through direct lines. Financing of the subsidy scheme is described in more detail in the section on Renewable energy charges. Information about the State Aid paid out by Elering is available at the state aid registry which is governed by the Ministry of Finance and can be accessed via their webpage.

Under § 591 of the Electricity Market Act, eligible wind power producers may receive subsidies until a total of 600 GWh of electricity has been produced from wind in Estonia in a calendar year. Calculations are kept separate for each calendar year. Most recently the 600 GWh cap was reached on 27. november 2020.

The European Commission approved and granted state aid permission to the Estonian support scheme for renewable energy sources and highly efficient combined heat and power plants in 2017. The state aid permit can be found on the EC website. The guidelines on State aid for environmental protection and energy 2014-2020 are published here.

To register as a subsidy recipient in Estonia:

Due to the end of the existing renewable energy subsidy schemes, the subsidy to new installations will only be granted through reverse auctions from year 2021. 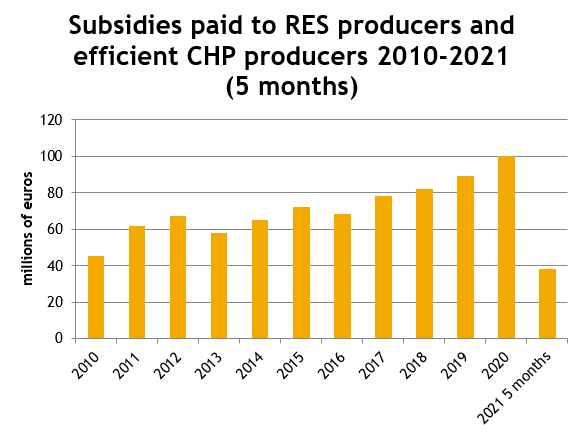 In accordance with the Electricity Market Act, an electricity producer using renewable energy or CHP sources (hereinafter: Producer) has the following monthly obligations:

Yearly obligations to determine the additional costs for financing the ongoing subsidy scheme:

In accordance with the Electricity Market Act, an electricity producer using renewable energy or CHP sources (hereinafter: Producer) has the following monthly obligations:

Yearly obligations to determine the additional costs for financing the ongoing subsidy scheme: