Today the commissioning of the Balticconnector gas pipeline connecting the Finnish and Estonian gas infrastructures was celebrated.

The Commissioning Celebration took place simultaneously in Helsinki, Finland and Paldiski, Estonia. The parallel events were interconnected with a live stream in the spirit of good cooperation between the two countries and the EU. Guests of honor and speakers at the event were the President of Finland Sauli Niinistö, the President of Estonia Kersti Kaljulaid, Minister for Economic Affairs in Finland Mika Lintilä, Minister for Economic Affairs and Infrastructure in Estonia Taavi Aas and Klaus-Dieter Borchardt, Deputy Director-General form European Commission Energy Directorate.

The bidirectional Balticconnector pipeline was ready for operation already in November, one month ahead of schedule. This enables the opening of the gas markets of Finland and Estonia and integrating them with the rest of the Europe on January 1, 2020. The pipeline improves the local operational reliability of the gas system and enables decentralized gas supplies, as well as the use of LNG and biogas.

“We are launching the single Finnish-Estonian-Latvian gas market on 1 January 2020. This is the historical step to integrate three national gas markets in Europe into one in such a large scale. The Balticconnector is the enabler of a much larger regional energy policy change than just a pipeline – it enables establishing a single cross-border gas market. Infrastructure without a market is a waste of money! We get both, infrastructure and market”, says Taavi Veskimägi, Chairman of Board at Elering.

“We are delighted to be able to commission the Balticconnector pipeline right on schedule, while at the same time laying the foundation of a functioning gas market. I would like to thank the professional staff in both Finland and Estonia, as well as all the contractors who guaranteed this success with seamless cooperation”, says Herkko Plit, President and CEO of Baltic Connector Oy.

75% of the EUR 250 million project was funded from the EU’s Connecting Europe Facility (CEF). A cornerstone of the project has been the good cooperation between Finland, Estonia, and the EU.

“The commissioning of the Balticconnector pipeline is key for the opening of gas markets between EU Member States in the Baltics and for the development of the Baltic regional energy market. During our cooperation over the past three years, INEA has highly appreciated the professionalism and strong commitment of both Balticconnector Oy and Elering AS project teams and we would like to thank them for their remarkable work which contributed to the timely implementation of the project”, says Director Dirk Beckers from the European Commission’s Innovation and Networks Executive Agency (INEA).

Baltic Connector Oy has been responsible for the project in Finland, and Elering responsible for the works in Estonia. The offshore part of the project was managed jointly by the two companies. Along with the two companies, a multitude of decision makers, contractors, consultants and other stakeholders have taken part in the project. The 77-kilometer long offshore pipeline between Inkoo and Paldiski is integrated with 21 kilometers of onshore pipeline in Finland and 55 kilometers in Estonia, connecting the pipeline with the gas transmission systems in the two countries. The total transmission capacity of Balticconnector is 7.2 million cubic meters per day.

See also the video about construction of the Balticconnector 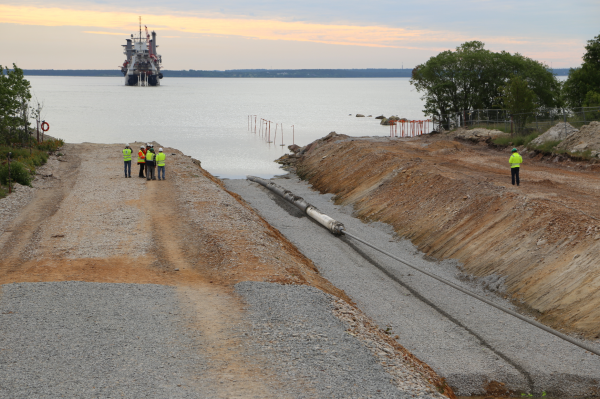